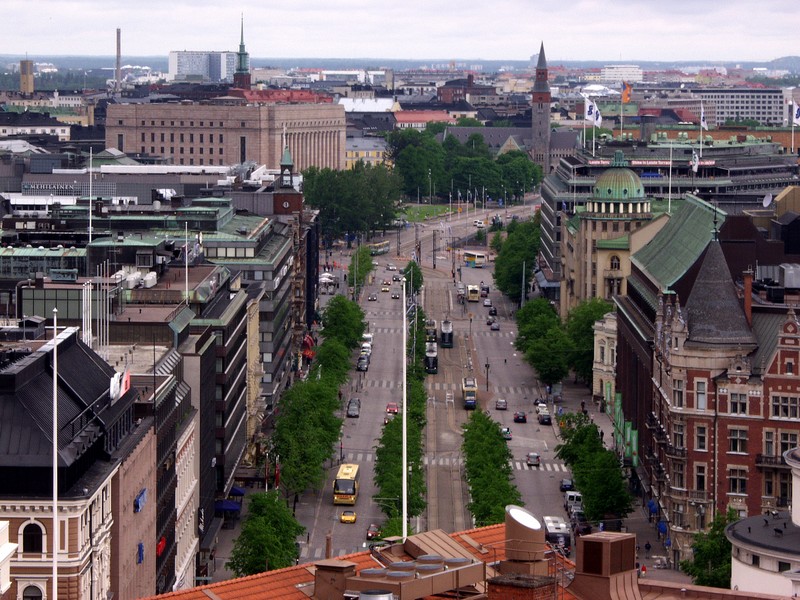 Mannerheimintie IN HELSINKI for the People

What would happen, if Urban Planning focused on the needs of people, instead of the secondary needs of traffic, technical maintenance and political ideologies? How would we plan our cities if we planned spaces with the aim of spaces where people feel good, spaces that people want to hang out in, and visit time after time?

We analyzed briefly European cities to get a grasp of what draws people in to a city. After the bigger cities of London, Paris and Rome we have Barcelona, Amsterdam, Istanbul, Berlin, Prague, Venice, Madrid, Budapest, Florence on most wanted destinations. Close to the top are also cities like Split, Dubrovnik, Granada, Brugge and Riga. Do we visit these cities because we can travel fast in our car from one point to the other? Or because there are many huge shopping malls that sell the same global brands we can get in any other city (or buy online)? Or do we visit these cities because we want to admire the tall buildings and the “vibrant life” of office work? No, there are no sky scrapers in most of these cities. The city here we want to visit is low,  dense, surprising and the city has a character of its own, a character so thick it can almost be touched. The character of these cities can invade our private space, the flowers in the city can grow in places we normally would see as impossible, cars are much smaller than we would ever imagine, and the engineer in us says this kind of urban planning is not possible. Still, these loved cities draw year after year, millions of people who want to live there, to visit and to start businesses there, on this city´s own `impossible´ terms. 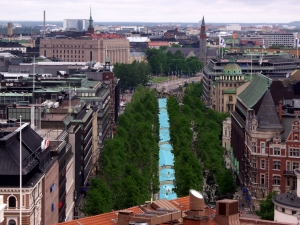 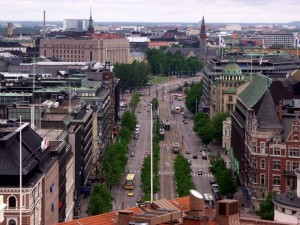 Urban Intervention on Mannerheimintie. Above: with an urban pool and vegetation focused on the pedestrian, and below: as it is today serving the traffic.

Based on these notions we made a quick, imaginary Urban Intervention Plan for Mannerheimintie, the main street in Helsinki centre. We thought: what if traffic would be restricted or moved? What if there would be more trees and green vegetation on Mannerheimintie? What if there was an urban outdoor pool for people, with sun beds, stairs you can sit on and dip your toes into the water, and refreshments served? What if the pool in crossed by many small pedestrian bridges? We also reckoned, what if we have entrepreneurial space for small businesses opening up to our street, and also mobile services allowed. Services that react to weather conditions changing the scenery depending on the climate of the day? We wanted a speaker´s corner with the best IT technology we have in Finland, harnessed for people who have something to say to the politicians inhabiting The Parliament at the edge of our Mannerheimintie. We wanted a wide pedestrian street opening up to open spaces like the Kolmen Sepän Aukio piazza, and it to have interesting things to follow while walking. This led us to that we need also non-commercial spaces next to our Mannerheimintie to bring the activity interest up.

Most of all, we need more people to inhabit Helsinki city centre and use our Mannerheimintie, so we need the offices, the traffic, and the un-rational  ideology that took our city in the 60-70´s to give it back  to the inhabitants of Helsinki.

An economically succesful city uses resources economically in a holistic sense, and looks at what attracts people. A succesful city is a network of places people want to explore, inhabit. People living, loitering, activating, changing, protesting, walking, meeting and not doing anything in a city are part of making a city.

We need to start planning our cities for people, instead of technically engineering them.

Vilhelm Helander,  Mikael Sundman: Kenen Helsinki? p. 117 : in Helsinki centre 1970: the amount of apartment buildings or central blocks that are taken over by offices is huge.

4 thoughts on “What if Planning focused on people?”